I’m not sure what else to make of Margaret Atwood’s Angel Catbird book, The Catbird Roars. It’s the third in the graphic novel series, so it probably didn’t help that I jumped in at the end.

I read the foreword for clarification. The style of the comic is influenced by the Golden Age comics, which came out between 1938 and 1955. Actually, the foreword, by Kelly Sue DeConnick, was extremely interesting. I normally skip that part.

The premise of the graphic novel is that genetic engineer Strig Feleedus creates a DNA splicer formula, gets in an accident and is left dying in his super secret mixture. Because, of course, accidents happen. He ends up being able to morph into an owl/cat creature. By book three, The Catbird Roars, he’s made enemies with his former employer (who is trying to create a rat humanoid race), befriended a bunch of half-cat people, and gotten mixed up with various life-forms including a cat vamp, and Neferkitti. And mice are their allies. The mice/cat/owl puns are goofy, so that makes them and the book a little likeable. Owls eat mice etc. Maybe this book is for kids? It was hard to tell based on where it was shelved.

Mostly, this makes me sad that I can’t watch Alias Grace on Netflix yet (Nov. 3 worldwide release; available in Canada, nope).

I’m even a cat person.

Atwood has a lot going on—books being turned into movies and television series; a novel out in 2016. Catbird is the most recent publication I could get my hands on, so I went with it. This probably was not the focus on her talks at the writers festival, which were grander and more philosophical in scale. Still. The comic was a fun reading experiment.

I recently listened to The Handmaiden’s Tale on audiobook, and it was a much different experience than it was reading it in high school. I may need to revisit some of her novels and try some new ones. I’d recommend doing that before diving into Angel Catbird.

Margaret Atwood appeared at Events 90 (Dennis Lee and House of Anansi: A Celebration) and 93 (Writing Now) at the 2017 Vancouver Writers Festival. 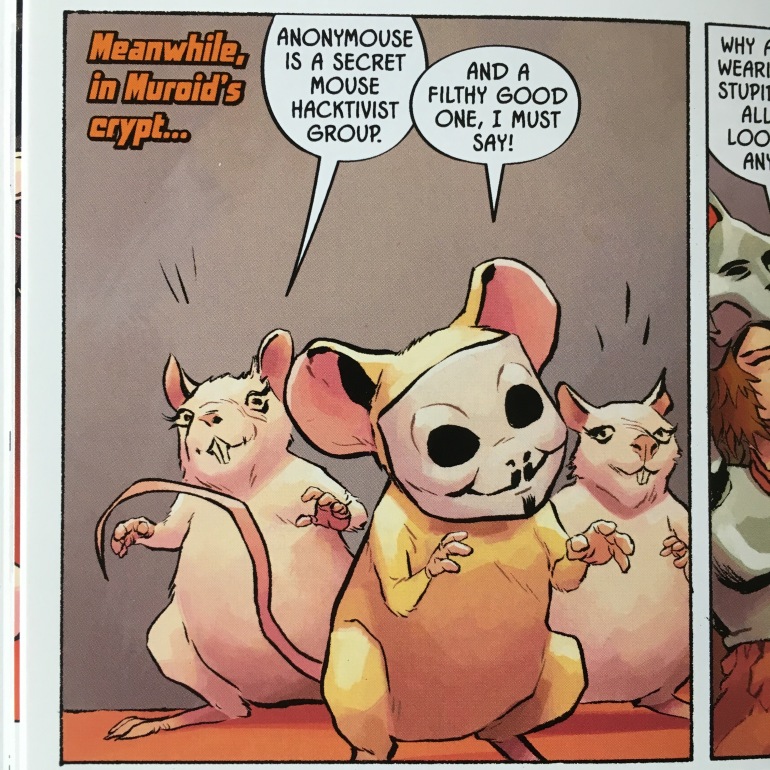